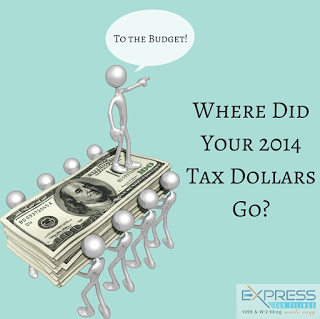 With the 2016 presidential election just a little over a year away, the American populace is becoming all too familiar with politicians bickering (some more loudly than others) over how they believe the United States should be run. Every four years news outlets and other media showcase what becomes the ultimate showdown between Democrats and Republicans – a showdown that basically comes down to how to spend your tax dollars.

The following numbers are a general overview of federal spending for the last fiscal year based on the 2014 budget. For a more personalized breakdown of how your taxes were spent, you can apply for a 2014 Taxpayer Receipt through the White House’s website. For every income tax dollar received in 2014:

Taxes are an integral part of the way our society operates; without them, we would be without many of the programs we’ve grown accustomed to as part of our day-to-day lives. Our elected leaders have a responsibility to make sure these programs receive the funds needed to keep running properly, but are dependent upon taxpayers to file income taxes on time and accurately.

ExpressTaxFilings can help make your tax filing process as stress-free as possible with our easy-to-use e-filing process for 1099s, W-2s, and Extension Form 8809. And if you have any questions or need assistance e-filing with ExpressTaxFilings, you can contact our South Carolina based support team of live professionals by phone at (704) 839-2270, by e-mail at support@expresstaxfilings.com, or by live chat through our website, www.expresstaxfilings.com.

So remember: stay informed and vote next November, but first, use ExpressTaxFilings to e-file your 2015 taxes by April 15th, 2016!