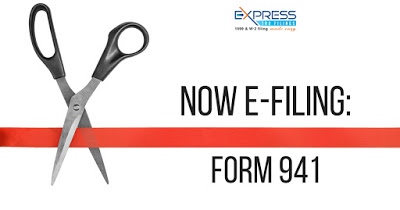 We’re pleased to announce the availability of Form 941 e-filing with ExpressTaxFilings!

Okay, now that the formalities are out of the way: check this out!!!

You can now e-file Form 941, the Employer’s Quarterly Federal Tax Return, right from your ExpressTaxFilings account. Remember: this form is filed by employers who pay wages to employees and also pay taxes on those wages. The form reports how much was paid, the Medicare and social security taxes withheld, and the taxes owed by the employer for the quarter.

So while you’ve technically got most of the month to get your first quarter Form 941 done, you can go ahead and do everything with ETF now just to see how fast and easy it is! And if you like it, you can even go ahead and prepay for the next three quarters for this year and get a 10% discount on your overall 2017 filing!

And if you have any questions about getting started with this form, don’t hesitate to drop us a line! We’re available by phone (704-684-4751), live chat, and email (support@ExpressTaxFilings.com) to help you get the job done.