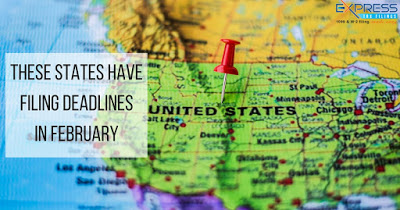 In the midst of all your 1099 and W-2 federal filing, don’t forget these states have similar deadlines at this end of this month: February 28, 2017!

Arizona
For the state of Arizona, 1099s and W-2s must be submitted by February 28. If you’re filing Forms W-2, W-2c, W-2G, or 1099-R and there is Arizona withholding, you must submit the Form A1-R, Withholding Reconciliation Tax Return, with your return. Your returns, including Forms A1-R or A1-APR, can be mailed to

Arkansas
1099s and W-2 Forms are due by the end of this month for Arkansas as well. But since Arkansas participates in the Combined Federal/State Filing (CF/SF) program, if you e-file with the IRS with ExpressTaxFilings, your forms are automatically shared with the state. But, you still have to have them in by the end of February. W-2 filers must submit their forms with the state along with the Annual Reconciliation Form AR3MAR. Paper filers can send their forms to

Georgia
Filers of Forms 1099-INT, 1099-DIV, and 1099-R need to have their forms into the state by the end of this month. Form 1099-MISC was due January 31, but you have a little more time on the other ones. You’ll need to submit those forms along with the Annual Reconciliation Form G-1003 either electronically or by mailing them to

Hawaii
W-2 Form filers on the beautiful Hawaiian isles must have their forms submitted to the state by February 28. Form HW-3, Employer’s Annual Return and Reconciliation of Hawaii Income Tax Withheld, must be submitted with your return. You can file these electronically or by mailing your forms to

Kansas
Kansas also participates in the CF/SF program, so when you file your 1099s federally, they’ll be shared with the state. However, if you need to report Kansas state withholding, you’ll need to file either a transmittal letter (Form KW-3) or reconciliation report (Form KW-3E), depending on your situation. W-2 filers must also have their forms turned into the state by February 28, and you can e-file or mail those to

Maine
1099s and W-2s must be filed with the state of Maine by February 28 as well. The reconciliation report for Maine is Form W-3ME, and it must be turned in with your return if you have Maine tax withholding. Forms can be filed electronically or sent first class to

Michigan
Michigan requires 1099s and W-2s be filed by February 28th. It’s part of the CF/SF program but it does also require Form 5081 be submitted with your 1099s and W-2s if there’s state withholding. You’ll also need to submit Form 447 if you’re doing Magnetic Media Reporting for your Michigan 1099s. If you’re paper filing, Michigan has a few different offices you’ll need to choose between:
If you’re including payment, mail to

If you’re not including payment, mail to

If you’re sending Magnetic Media Reporting, send it to

Minnesota
Minnesota participates in the CF/SF program, so if you’re filing 1099s with the IRS, just make sure you do so before February 28th so they’re shared before the Minnesota deadline. W-2s are also due by February 28th in Minnesota, and you can e-file these forms or mail them to

Missouri
Once again, Missouri is in the CF/SF program, but if you state withholding to report you’re also going to need to send in Form MO-W-3, Missouri Annual Transmittal, with those 1099s. This form will also need to go with W-2 Forms filed with the state unless there’s withholding tax due, in which case Form MO-941 needs to be filed. All of these are due by February 28 and can be e-filed or mailed to

Montana
1099s and W-2s are due in Montana by February 28th and both need to be accompanied by Form MW-3, Montana Annual Wage Withholding Tax Reconciliation Form if state taxes are withheld. If there are no state taxes withheld, Form 1096 should be filed with your 1099 return. These can be e-filed or mailed to

New Jersey
New Jersey participates in the CF/SF program, but you may still need to file reconciliation report Form NJ-W-3M, depending on your situation. Additionally, W-2s must be submitted to the state of New Jersey by February 28 with Form NJ-W-3M if paper filing and Form NJ-EFW2-S if you’re e-filing. Paper forms should be sent to

New Mexico
1099s and W-2s reported to New Mexico must be submitted by February 28 and both should be accompanied by Form RPD-41072, Annual Summary of Withholding Tax Statement. You can e-file these forms or mail them to

Oklahoma
Oklahoma does not participate in the CF/SF program, so you’ll need to make sure to file a state copy of your 1099s with the state. Form W-2 is also due to the state of Oklahoma by February 28 and must be submitted with Form W-3. E-file these forms or mail them to

West Virginia
Forms 1099 and W-2 must be submitted to the state of West Virginia by February 28. The reconciliation report for these forms is Form IT-103 and the transmittal form for Form W-2 is Form IT-105. These forms must be e-filed or mailed to

And you Illinois filers, don’t think you’re off the hook just because you’re not listed above. You’ve actually got a W-2 deadline next week: February 15, 2017. The reconciliation report for Illinois W-2s is Form IL-941 and you can e-file these forms or mail them to